Play your game without limitations 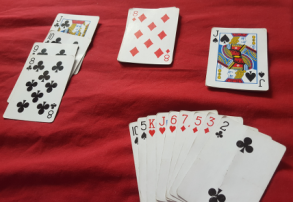 Trex is played by four people using a standard international 52-card pack without jokers. The cards in each suit rank from high to low: A-K-Q-J-10-9-8-7-6-5-4-3-2. Deal and play are counter-clockwise.

To begin the session, the cards are shuffled, cut (by player to left of dealer) and dealt out to the four players, one at a time, so that each player has 13 cards. It does not matter who deals first, but the player who is dealt the 7 of hearts in this first deal is said to "own the kingdom." This player chooses which contract to be played each hand, and is also the dealer for the next four deals. During his or her "kingdom" a player may choose to play any contract based on his or her cards. There is no rule for playing the contracts in a set order, and there are 120 possible combinations of contract orders.

After the first dealer has played all five contracts, the kingdom passes to the player to his right, and so on. In some variations the game passes to the right first two times, then to the person opposite of the second player then to the remaining player. Each of these players, during their kingdoms, must deal five times, choosing a different contract each time, without repetition. After the four kingdoms are complete, 20 deals have been played, every player has chosen every contract once: the game is over.